The technicans at hendersonville muffler Company are VERY familiar with oxygen sensors and air flow sensors of all types. I have included a bit of history on the oxygen sensor and how they work because we feel that our customers work really hard for their money and they should know what the parts are that are being installed in their car or truck during their automotive repairs. Many of the customers have no interest in learning about the parts of their cars and we understand that. it's okay to depend on the technicians at hendersonville muffler company to properly perform you automotive repairs because we ARE DEPENDABLE. For those of you that wonder why you need oxygen sensors in the first place and what they are here is a little bit of history and some information on how they work:

Oxygen sensors have been around since the 1970's. They were invented by the engineers at Bosch and they were named Lambda sensors. Lambda is the stoichiometric ratio of fuel to air, (which is approximately 14.7 to one). The official name of the sensor is still Lambda sensor but because they measure the unburned oxygen left in the exuast they are commonly called, "oxygen sensors". When the oxygen sensor came along it changed the way automotive technicians and engineers did their jobs. The oxygen sensor measures the leftover oxygen after cumbustion. The oxygen sensor gives data to the engine management system, (ECM) to control the amount of fuel being distributed to the engine. Before oxygen sensors came along the automotive manufacturers were having a really hard time making cars and trucks pass the strict emissions standards.

The Invention Of The Heated Oxygen Sensor 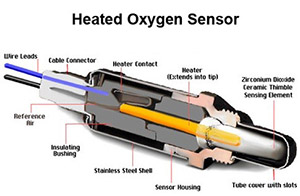 The one wire oxygen sensor that you see here was a revolution to the automotive industry. Like anything else after a few million of them were put into production in a few thousand different vehicles problems with the original design started to surface. one major problem was that the sensor didn't start to work until it reached a very high temperature. This meant that the engine had a tendency to run rich until the oxygen sensor warmed up and began to aid in the control of the mixture. The engineers at Bosch saw this proplem and addressed it by adding a heater system into the sensor which basically works like the old cigarrette lighter in a car. A small heating element installed inside of the sensor allowed the sensor to begin operatin after only a few seconds and allow the ECM or PCM to begin controlling the mixture sooner. This was done to extend the life of the catalytic converter. The four wire, (and sometimes 5 wire, 6 wire, or 8 wire) heated oxygen sensor took over the industry by storm and this is what is present in all modern vehicles.